The Eagle Has Landed

We're back.
I'm checking email, opening Christmas cards, and catching up on blogs.
Mr F is trying to give me an anxiety attack by up and deciding to sell his junker NOW... why?  why people?!!  why now?  In two weeks we will know if we are staying or going... why would you sell your car RIGHT NOW?
Come on!  Pull it together Mr F!  I can't take this.
I mean I don't care if he sells it... but what would be the point of selling it this minute?  It only complicates my life.  It means a week or two (or more) without a second car in the dead of winter (and wouldn't you know it is actually colder here today than it was in Michigan... and people... it was COLD in Michigan).  During the same two weeks when I'm going to have an insane amount of small children in and out of my house and I need him to be able to drive Kid to school.  Is this not something that could wait two weeks?  And maybe something you would discuss in depth with your partner before doing?
That's what I thought.
He must be feeling pretty positive about his future prospects...
On to important stuff...
I'm the size of a small whale.  My pants are SKIN tight.  As in... they didn't use to be *skinny jeans* but now they are.
Mr F did repaint the kitchen and hang our new kitchen light (yay) but he did not move anything else from where it was when we left... meaning same exact food in the fridge... same post-Christmas morning mess, etc ... same unmade bed (boo).
Consequently, I'm having significant anxiety about getting the house back to "baby proof" for babysitting Monday morning.
On that front I've decided to quit babysitting (are you proud of me?... don't pat my back just yet I still have to tell everyone.)
All in all, I'm going to kickass in 2010.  For real.  I can feel it.  But first I need to get some stuff in order.
My New Year's Resolution is.... drum roll please...
To protect my personal interests. (it hasn't even been an hour and alert readers will note I've already edged this down a bit... baby steps I guess)
and, Yes, meeting my kids needs is in my best interest so there is no conflict on that front... don't worry they'll still eat
This should get interesting...
Posted by Mrs Furious at 1:46 PM 16 comments:

Labels: horrific turbulence mid-flight today... Baby was so freaked she played dead (I do not kid) and eventually fell asleep... so it was the best flight of my life, random updates

Step One: Stay Within Sight Of The House 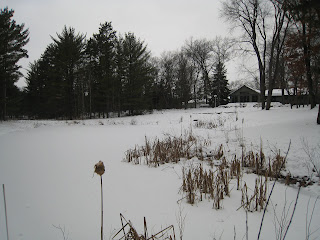 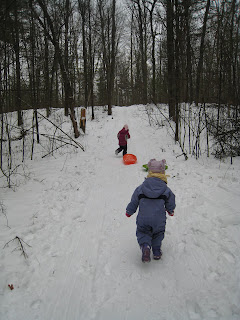 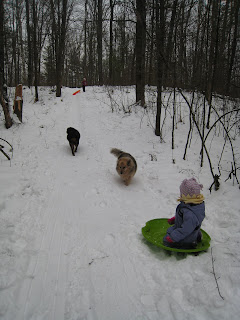 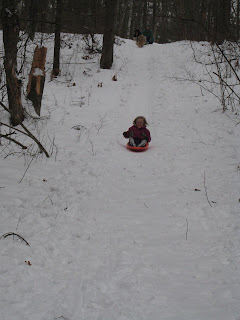 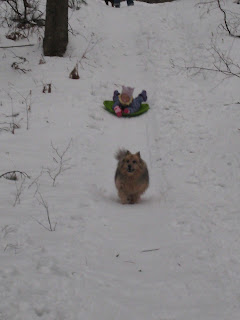 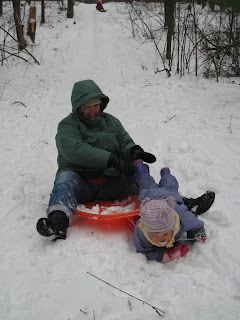 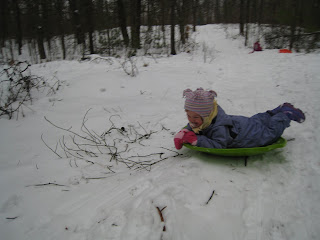 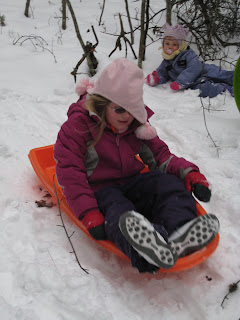 Labels: if at first you don't succeed try try again, yes Baby ran over the dog... it did not end well for either party

The Furious Clan Gets Buried Alive... AKA... Who Else Would This Kind Of Thing Have Happened To?

I just nearly killed my children and myself.

Me, from a heart attack, after pulling a sled & child through ice crusted, foot deep snow, uphill and downhill, completely lost I might add, for 45 minutes at break neck pace (being terrified will do that).

The kids from having to fend for themselves, after my sudden death, completely lost in the wilderness too far from any houses for anyone to hear them.

I tried not to yell "MOM!!!" too shrilly so as not to alarm the kids but I think the fact my pupils were fully dialated might have tipped them off.

Let me tell you it doesn't take long for the panic to set in when you are lost in below freezing temperatures. Especially when one of your crew is a not especially hearty two year old.

So much for the simple sledding expedition.

Did I mention that my mom lives on something like 40 wooded acres and that the trail system is..um.. totally snowed over... and about 100 feet in it became clear that everything looked exactly the same in every direction?!

Or that the large dog tracks looked suspiciously like wolf tracks?

Or that in an effort to return to the house as quickly as possible I decided, after a fair amount of time, to attempt to follow the trail the full loop back to the house(since trying to veer off in hopes of finding a shortcut could have been an fatal decision under the present circumstances... and I do NOT jest)? Imagine, if you can, how difficult that decision was knowing that commiting to that trek would be close to impossible for Kid to pull off...and yet I would not be strong enough to pull both kids back myself? But at that point what choice did I have? Both directions might be too far for her (or me I was beginning to fear) and no one could hear us and no one knew where we were.

That is until I saw a house, off in the distance, that was not my mother's house, which meant we were significantly off course.

People, I was terrified. Every potential scenario running through my mind. Leaving them in the frigid temps while I ran back?... no they'd wander off and die. Resting before reversing?... we might get too cold and disoriented. You can see where this starts going in a fear clouded mind.

With only one option left, and terror slowly taking over, I reversed our course and we followed the only reliable path we had... our own.

Once I finally found the trail back to the house, pine needles stabbing my back and neck after bushwhacking to a clearing pulling Baby, kids crying, poor Kid limping slowly behind exhausted and frustrated, I collapsed on the ground.

I was sweating and shaking from the physical output... and near tears. The kids were both past that stage and well into cold, tear streaked, and pissed.

When we made the final trek to the house we stumbled in a haggard, disgruntled, slushy bunch.


"How long until you came searching for us?" I asked.

"What? We're you guys lost?" My stepfather replied.


Yeah that's what I thought. See why I was so worried?!

Who knows how long we might have been out there.

And how long does it take before you resort to cannibalism (it was lunch time)?
Posted by Mrs Furious at 1:19 PM 16 comments:

Labels: just like a scene from a movie... you know right before the ax murderer shows up, note to self... next time bring a cell phone, oh those were some good times, one more reason to stay fit

The Upside?... It Was Only Two Hours... And Nobody Yelled At Me... Or Escorted Us Off The Plane

let's start at the beginning...

The flight was horrible.

Starting a couple of weeks before our trip Kid decided to inform Baby (unbeknownst to me) that sometimes planes fall from the sky and crash. So... hmm... NOT HELPFUL.

The night before our trip Baby announced that she would not be flying in a plane but that she would walk to her grandmother's house. That was kind of cute... but then... when we got to the airport and I struggled to get her snowsuit off for security, I realized she was serious. VERY SERIOUS. That's when she started screaming.

So you can imagine how fun that was for me.

Getting everyone's coats and shoes off and through security, along with Kaya, an animatronic baby (the TSA workers loved that I might add), a stroller, and a tantrumming toddler... oh and a large anxious 7 year old who is clinging to me, pulling on my shirt, and refusing to JUST WALK THROUGH THE METAL DETECTOR ALREADY!!!

Of course I did this all with a calm demeanor and a smile on my face (would you expect anything less?). You really don't want to act weird in anyway when trying to send an animatronic baby through the xray scanner.

Oh, did I fail to mention the terrorist attempt the day before at the Detroit airport? Or that we were flying to Detroit? Or that I didn't know anything about it until my grandmother called to tell me half an hour before we left for the airport? Sending my usual flying-with-the-kids-alone anxiety through the roof, and making me wish I had some kind of medication? Or that upon arriving at the airport that there were TVs with constant coverage running and that my 7 year old is old enough to understand what they are talking about... and that my 2 year old is already terrified of flying?

Yes, it was a perfect storm of horror.

I got Baby calmed down until we had to board the plane.

But remember that it is a small airport, and a small jet, and we have to go outside to get on. Which, if you haven't done it in awhile, is really loud. And if you are 2 years old, and terrified of planes,... just a wee bit disconcerting. That's when she started screaming and actively fighting me.

Those were good times. Even candy didn't work.

Remember that our seats aren't together?

And, as it turns out, because she's over 2, the flight attendants insisted that she couldn't sit in my lap during take-off.

By this point she was just whimpering "I nervous" and her fingernails we're digging into my flesh from across the aisle(my children are nothing if not articulate when it comes to their feelings... I wonder where they get that..)

I mean how do you explain to a two year old that this big plane is going to fly in the air and it is perfectly safe... when... most adults can't even come to terms with that?!

Once we were in the air for awhile she calmed down a bit. But anytime the plane hit turbulance, or dipped a wing she's start screaming "WE'RE FALLING!!!"

And don't we all feel like that? The only funny part is that I'm sure she was starting to freak out the other passengers... like... "my God what if that Baby is right?!... what if she's having premonitions?!"

It didn't help that once we were decending I told her "We're going down." Oops. I meant it in the *good* way.

When we finally landed she clapped and cheered "We're on the ground!". I think the entire plane was happy for her at that point.

Labels: shh... don't tell her we have to fly home... can't wait for that... maybe I'll track down some vallium first
Newer Posts Older Posts Home
Subscribe to: Posts (Atom)