Things are coming along.

This will be the last weekend we spend sprucing up the house.

The realtor didn't have anything he thought we needed to do.

Mr F has decided to repaint 75% of our woodwork. Have you ever seen our house? We've got moldings up the wazoo. This is a major project.

The kids are belting out Taylor Swift.

I'm about to knock out another 2 continuing education credits.

I alternate (minute by minute) between excitement and anxiety.

The reality is that over the next few months I am going to pay the brunt of the price for this.

But I believe we're, ultimately, making the wisest choice.

Monday a photographer comes to take pictures and our house should be listed by Thursday.

Mrs F continuing to watch kids 4 days a week while keeping the house ready to show at a moments notice.

Mrs F doing every other thing necessary to run our household. For real.

Mrs F spending nights and weekends culling our belongings in the basement to the absolute bare minimum. (Read: I'm never doing this again. If we're not keeping it for the next 50 years it's headed to Goodwill. I mean how many times are we going to move boxes we haven't opened? This could be officially 3 moves. Same unopened boxes. I'm not even opening them, people, they're out of here. Don't tell Mr F)

Mrs F making any progress in the diet and exercise realms. Fuck it. I am a human. I will continue to workout as much as possible (currently only 3-4 days/week) and try not to eat like a pig. My big goal is to make this major transition without gaining weight. I think that will be accomplishment enough.

Mrs F cooking 21 balanced meals from scratch every damn week. We will be eating pizza a minimum of 3 times a week. Call CPS.

Labels: if we were loaded I'd just list this priced to sell... prepare to eat the loss... and chill out at WDW for a couple of weeks... sadly that is not how this is going to go down

Lay your bitchin' on me.
I'll start...
I just changed THE most disgusting poop diaper of all time.
It took me TWENTY wipes to get that booty clean.
Sometimes when I'm doing something like that I think...
"You cannot come up with enough financial compensation to make this worthwhile for me."
I mean... I am not the one who thought it was a good idea to serve this kid a pound of black beans yesterday... and I should not have to clean up the shit storm.
Did I mention that this is a little boy?
I'm still not totally used to changing boys.
Well the necessity of 20 wipes and the need to actually clean all his parts resulted in something that shall remain nameless.
But believe me when I tell you I have never been more traumatized.
Ever.
Ever.
I just wanted to clutch my face and scream "MY EYES!  MY EYES!"
But then I might have gotten Ecoli in them and died.
Girls might have more 'tude but they don't traumatize you when you change their diapers.
And there is something to be said for that.
Posted by Mrs Furious at 10:22 AM 21 comments:

Labels: I have never wished I was blind more in my life, my soul is black now, the horrors, what was I supposed to do?... I couldn't leave it all poopy

Realtor walk through today.
Of course, as luck would have it, I also have 3 kids under 3 today too.
Let me tell you, this motley crew of toddlers is not down with the new house rules.
Subsequently my stress level is through the roof.
Posted by Mrs Furious at 11:39 AM 9 comments:

Labels: have you ever seen what three small children's combined efforts can do to a house?... it isn't pretty... and trying to micromanage it is pushing me to the very edge of my capacities... all of them

This morning I rubbed Baby's back.
I've been trying to give in more to her cuddly neediness. It'll end. And she obviously needs me more than I sometimes think.
She's an interesting dichotomy that way.

While I rubbed her back I thought of preschool.

And the fact that she's three now, not the baby we let her pretend to be most of the time.

I thought, maybe, it was time to start introducing her to her name.

It's not her fault that her name is the longest name in the history of the world.

Good God I think back to the nervous breakdown Kid had when she had to master her name for preschool and her name is only 4 letters. Nine letters?! What the hell were we thinking.

That's why I thought maybe we should start now. Give it some time to sink in.

I grabbed a notebook and started to write her name. Then scribbled it out remembering too late that little kids start with all capital letters.

So I wrote her name several times and then made dotted letters for her to outline.

She was pretty outraged.

"Those are not ABCs!" Baby said agitated.

"Yes, they are." I reply then start to trace one for her "See? You write on top of them to make your letters."

"I want them to Shut Up." Baby says showing a disgruntled attitude usually associated with her older sister.

"Shut up?" I ask slightly confused... you know cause the letters aren't really talking... but, hey, either were my windows.

"It means you shut your mouth." Baby replied with contempt.

She might not be ready for preschool but she'll fit right in with the mean girls in high school. 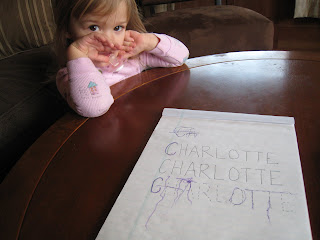 Labels: and I thought teaching Kid was hard, oh me thinks the teenage years with one moody nudist and one attitude laden defiant child are going to be good times

Mr F Is Going To Try And Deny This...

But he watches The Bachelor.

Don't pay any attention when he chimes in to say "Not really... I'm just trying to spend time with Mrs F and she watches it." or "It certainly isn't what I would chose to watch." or some other lame excuse.

Don't believe a word he says. He doesn't just watch it... He's into it.

"If he doesn't chose Tenley I'm boycotting the final episode."

The proof is in the pudding, my friends.
Posted by Mrs Furious at 10:19 AM 18 comments:

Labels: sometimes you need a little lowbrow entertainment... it's like People Magazine at the checkout... you don't want to look but you can't look away, Vienna?... Jake please stop the madness 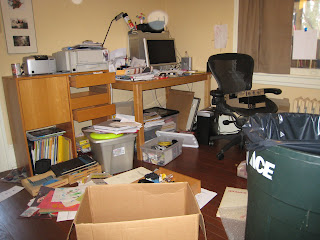 After:
Don't mind those drying sweaters. Once we finish this room tonight I'll change the pictures out. The color of this room is not one we chose... do not judge. It's more like the top picture than the bottom. 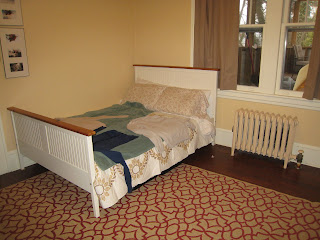 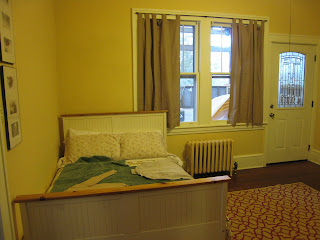 The other side of the room has my desk (cleaned off) and two closets. We still have my small Hoosier baking cabinet in here and that is going down to the basement tonight. More pictures later.
And for those of you worried about the shared desk situation... problem solved: 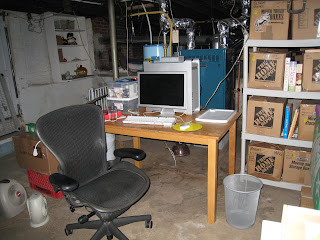 Sucks to be you, Mr F (don't worry about him it's warm by the furnace)

Girls' Room:
Sadly, I do not have a before shot. You've probably seen it before. Mr F and I love this room but usually it looks like a cyclone just went through it. I got rid of 3 circle area rugs and moved the bigger rag rug. I got rid of 2 huge pink stuffed animal bins and replaced them with 3 under the bed storage containers on rollers (they were $9.99 each and they are slightly taller than typical yet less deep so they fit easily side by side perpendicular to the bed frame). One has the majority of their dress up stuff. Remember the dress up corner behind the door?... yes... we needed to minimize that for showings. Gone also is their pink dress up chest. So some serious decluttering went into this room and it looks fantastic. 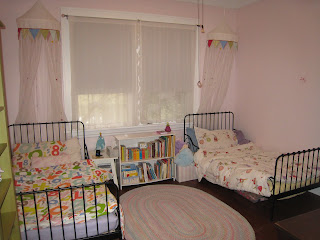 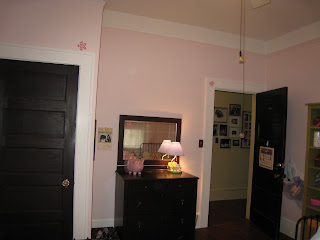 Labels: all of this progress and working together and neither one of us threatened to file for divorce... must be a first

Yet another year wherein Mr F gives me a sentimental card and I give him one like this... 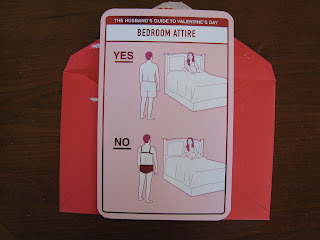 Labels: this has got to be the best card of all time
Newer Posts Older Posts Home
Subscribe to: Posts (Atom)