Mr F is at the house directing the movers as we speak.

Turns out our couch won't fit in the house. Hmm. Too bad we spent $300 on ugly unnecessary red chairs when we now need a new couch.... (just sayin)

Can't wait to walk into that house full of chaos.

Here are some things...
We got the house for a deal.
The bones of the house are in fantastic condition for it's age.
The yard is spectacular.
The interior cosmetics... not so much.
Holy mackerel.
You REALLY block out light fixtures when you're walking through apparently.
It's like an 80s department store in there.
All the carpets need to be replaced ASAP due to dog & large human pee stains and odors.
I think we'll all be wearing Baby's swimming nose pinchers until we can get that ripped out.
The kitchen tiles (in an awesome pattern I might add) and laminate counters are... FLESH colored.
Appetizing.
The kitchen sink... is... plastic.
I didn't even know you could buy flesh colored plastic sinks. Who knew?
Too bad my cast iron pans will melt it.
The glass topped stove has chunky chips in all the burners.
I spent three hours cleaning the fridge.
The pantry?... mouse poop... we'll be getting that cat pronto.
This is not to complain... just to say... we didn't notice any of this when it was furnished.
And, while the house is certainly move in ready (and still a very good deal),
It needs a lot more cosmetic work than the coat of paint we had anticipated.
Thankfully Mr F is handy.
Unfortunately he's also slow.

On the positive side this will all make for amazing before and afters....
Posted by Mrs Furious at 10:23 AM 13 comments:

Labels: don't worry about those light fixtures...Kid has picked out Lowe's chandeliers for every single room

The girls and I have logged MORE THAN SIX THOUSAND MILES in the ol' van this summer.

I try to make it somewhat enjoyable... 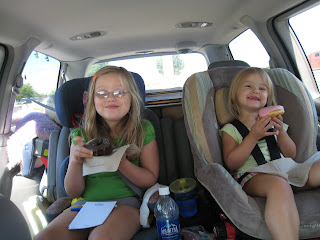 Which kind of explains our weight gain now doesn't it?

We stopped at Ikea again yesterday. 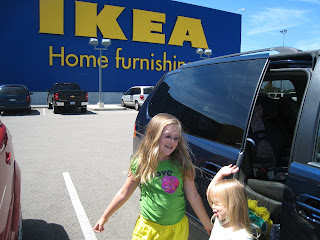 I'm still impressed with myself for coming up with that pit stop idea. I dropped the kids off to play, grabbed a cup of coffee and made myself comfortable in a fake living room (I wanted desperately to make myself comfortable in a fake bedroom) and called a friend. As it turns out hot dogs were only 50 cents and after days of McDonald's I was pretty excited to eat my meat in oblong form. So we had lunch and then hit the road again, feeling surprisingly refreshed. I said to Mr F on the phone "I really like going to Ikea and not buying anything."(It really is a completely different experience) And he said "You've built up an immunity." Although I should say that yesterday Kid stood in front of the "As-Is" room and held her arms out to block me yelling "DON'T GO IN THERE!" So some of the credit goes to Kid... although not all of it since she spent about 20 minutes trying to haggle me into buying her large sheep skins...

You've missed a fair amount of Furious shenanigans as of late. I assure you Kid is still Kid and Baby is still Baby. I wish I had more photos of their craziness...

Last night I walked into the bathroom to see Baby brushing her teeth with swimming nose pinchers on. God... that would have been a classic Baby pic.

Kid still makes me laugh non-stop. The other night while eating McDonald's in the car (umm... forgive us) I handed Kid the fries (Baby's fries I might add.... Kid didn't order them) I told her she could take some out and then give the bag to Baby.

Oh I couldn't help laughing and laughing... it was so classic older sibling. As she said one day "If I'm weird it's because you made me that way." True, true. And I call that a success worth celebrating!

That's what I've got folks. Our house in Asheville closed successfully yesterday. We're closing on our new house this afternoon. So we're almost done. Our movers come on Saturday. Until then we're still kicking it at the Cougar's.
Posted by Mrs Furious at 11:06 AM 9 comments:

I kind of want to divorce Mr F right now.

We were up until around 3 AM packing.

And then up again at 7 AM packing.

The movers are there now.

I took the kids out of the house so they won't get trampled.

Back in a few hours to clean.

Shove whatever is left in the crevices of our cars.

Labels: turns out having Mr F in town for 8 days is really only helpful if you actually pack for 8 days
Newer Posts Older Posts Home
Subscribe to: Posts (Atom)