Well, I'm Here And I Guess That Is Something

#1 Truth be told I'm still trying to get back on my feet.  The flu and then the sinus infection then the bad reaction to the antibiotic made a combined 17 days of hell.  I mean, seriously, it was a very hard time and went on so long that, whether it makes logical sense or not, you start to question if you can get better.  I am.  So there is that.  I am also just exhausted which I have heard is typical for the aftermath of this particular flu strain.


#2 Kid's teacher pissed Mr F and I off so royally, that I wrote a song about her burning in Hell for all eternity.  I'd get into it but it makes my blood pressure rise.  Just know that she marked something wrong on a test that is factually correct. (which she couldn't deny but still dug her heels in and refused to change the grade siting something bogus which was complete BS... the teacher doesn't understand the material enough to accept an answer written in a complete sentence... just trust me... I thought  I was going to go HULK my veins were throbbing so hard)  When we sent it back she actually said "Oh, yeah, she was one of the one's that told me all about it."  Uh, what?!  Don't we give kids that know all about the subject extra credit not mark it wrong because it was too thorough of an answer?!  I just want to kill that woman!!!!  And, P. fucking S. if you want a one word answer make it fill in the blank, if you leave 3 blank lines to fill then you'll need to be able to read and process a complete sentence or two.  WTF?!


#3  I took the cats to the vet several times the past couple of weeks.  Once because Big Boy had a cold and I wouldn't have been concerned until I googled "cats with colds" and then I had to pony up the big bucks.  Then they each had their physicals.  Yes, I know this is not interesting.  What was interesting is how different their personalities are which was evidenced by how they reacted to the exam room. 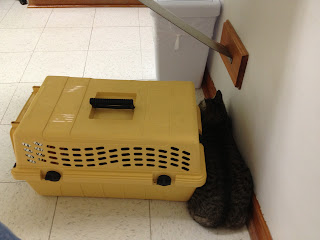 "I don't think they can see me here" 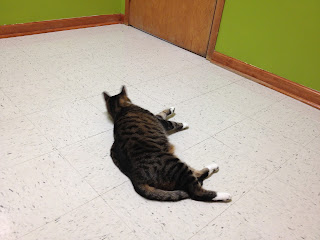 "Welcome to my room"

Interestingly while Tiger was skittish and fearful, he complied with everything.  Big Boy was exceedingly friendly and giving them hugs, but he is so big that even the vet and vet tech were intimidated by him and they gave up trying to get a temp or take blood when he wasn't having it.  They just kept saying "Wow, he really is a big cat."  He's so bossy he thinks he rules the world.  He's also obsessed with butter.

#4 For Valentine's Day I managed to pull off the cutest freaking Valentine's of all time!  These were little gift bags that are decorated with heads & limbs & accessories that I picked up at Target.  They were a bit pricey for how many we needed to buy.... but... please, they were so cute.  We definitely had the coolest Valentine's at school.  For real.
Baby's Class: 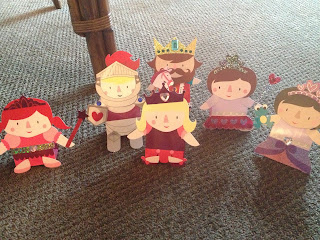 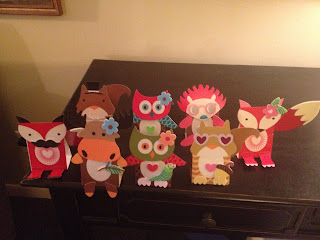 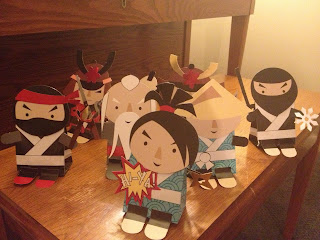 Kid was officially the coolest girl in her class when she gave these to the boys.
They actually thanked her.  It was big.
(It only took us 79 hours to make them)


#5  I made this beef stroganoff this week.  It was FANTASTIC.  I changed it a wee bit.  I used a bit of butter & olive oil to sear my steak instead of cooking spray.  I added a splash of Sherry in with the mushrooms to deglaze the pan and some dried thyme (because it just rocks with mushrooms).  I used sweet (not hot) paprika and omitted the parsley and green onions because I didn't have those on hand.... and it definitely didn't need it.

I really like this My Recipes site. I had a lot of time while I was sick to check it out.  I think there is more useful stuff on here then I get from the emeals plan I paid for and never use.  I like that you can get a whole month of recipes, there are tons of archives, and the quick and easy dinners really are quick(ish)... and that they are from good reputable sources like Cooking Light.  I'm into it.  I'm going to try the Salmon Croquettes this weekend.

#6 Baby left this by the hair brush this morning. 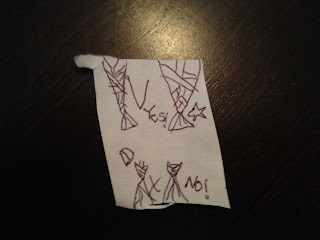 Apparently, I've been putting the rubber bands up too high on her braids.
I stand corrected.

#7  My Dad wrote a confession for some of his more heinous wrong doings which ultimately had destroyed any chance I had at a stable home life.  A confession which changes everything and completely rewrites my understanding of my life.  Sounds dramatic!  It was... sadly.  Anywho, I was shocked and greatly upset not only by the revelation but by the complete lack of empathy shown in this "apology" which was more of a narcissistic pity party for himself having had to face consequences for his choices.  He never once acknowledged that WE ALL faced consequences for his choices.  It was hard to read.  But it was also a gift.  Because now I can divorce him without guilt or remorse (something I've wanted to do for YEARS).  He has crossed lines that cannot be uncrossed.  And the truth is, this secret was the missing piece of the puzzle for me.  It explained why I have had the feelings I've had towards him.  Suffice it to say, he has never brought anything positive to my life (literally, ever) and is an incredibly toxic person.  While, I'm sure it wasn't his intent (although I don't really know what his intent was) in this instance the truth has set me free.  I was not able to protect myself from him as a child, but thankfully I am able to do so now.  This is a big deal, but I have to say I feel lighter than I have in years.

Which leads me to a pretty big breakthrough... some of you who may have been raised to believe you aren't worth anything, that you don't deserve anything... will maybe get this.  I have spent so much time trying to get this man to finally approve of me, to like me... and I, now, can sit back and say "I don't like you, I don't approve of you... I don't choose YOU."  That is incredibly cathartic.  He used to be my inner negative voice (I would literally attack myself with what I thought he'd say about my life choices) and without that, maybe I can start to enjoy my life?  Learn to let myself feel deserving of something more than hardship.  I'm allowed to have a good life, and to be happy.  I don't need to earn it.  And I don't need to hold myself back from it because I feel I'm unworthy.  He was wrong about me.

There are a lot of ways this will effect me/us and one is that we are not going to adopt... more on that later... but mostly, this:  I don't need to save everyone in order to be a good enough person, to justify what I have.  My life was hard and sad growing up, and I deserve to have a peaceful life and to give that to my children, now that I can.  Our family balance is good and healthy and I need to protect that for them and myself.  I'm a good enough person even if I don't sacrifice our stability for someone else.... that is big for me... and hard... but I also think it is true.

So let that sink in.

Labels: adoption, bonus insights for those of you committed enough to read to the end, my dad is a douche bag, random bits o' Fury

Have you ever had a grocery bag break tossing your gallon of milk out onto the floor?

The 3 foot fall splitting open the gallon jug, hemorrhaging milk all over your kitchen?

It is a horrifying thing to behold.
Posted by Mrs Furious at 4:39 PM 3 comments:

Labels: Kid confessed she was really glad it didn't break while she was carrying it... word...when something of this magnitude goes down we all know you only want mom to be able to blame herself
Newer Posts Older Posts Home
Subscribe to: Posts (Atom)