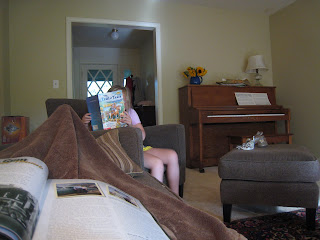 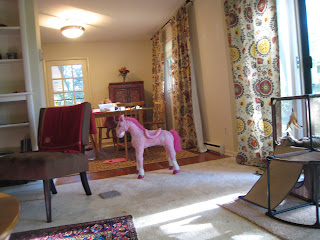 Labels: kitchen is still not blue... we haven't hung anything... light fixtures are still in boxes... still have pee carpets... but life goes on

Oh What?... You Thought I'd Have Something More Interesting To Report Than My Cats Eating A Hot Dog?

Well... I do. But this is the first week of all of our activities, and as any parent out there knows... I'm busy.

I will say that (and please check this out for coincidence/fate/magic) I had three classes this week (two Baby, one Kid) with the same woman and her kids.

The woman... is the president of the school board.

She is also a trouble maker like myself, and completely down with my M.O.

She has seen us in our safety vests (who hasn't... and FYI on that front we've got a 50% increase in cars stopping at the crosswalk)

She will see about the crossing guard (although she estimates it to be a $20K request and not likely for this school year).

She's also invited me over for coffee.

I'm just saying that we've been here only a month and I've managed to meet and address my complaints to the School Board President and District Superintendent. That's pretty amazing, seeing as I haven't met ANYONE else. I mean for real... the only two people to talk to me... are the two people I needed to talk to most.

The world is a mysterious place.

The other day when Kid and I were walking/scootering home from school, a girl leaned out of a bus window and yelled...

And that, my friends, might have been the greatest moment of my life.
Posted by Mrs Furious at 9:12 PM 12 comments:

Labels: P.S. Kid hasn't complained about the safety vest ever since

The cats ate a hot dog.

Can't wait to see the repercussions from that.
Posted by Mrs Furious at 2:39 PM 6 comments:

"Let's get your shoes on, Dad's driving you to school." I say to Kid this morning.

"He is?" Kid asks surprised.

"Have you seen me this morning? I'm not even dressed." I return.

Kid grabs my neckline and quickly looks down my shirt.

"You don't wear a bra at night? I thought women wore their bras all the time." Kid says.

"Nope. They're really uncomfortable to sleep in." I explain.

"So your boobs are just sloped?" Kid asks.

"I think that men would find that really unattracting." Kid speculates.
Posted by Mrs Furious at 10:13 AM 8 comments:

Labels: good morning to you too, she also wanted to know what would happen if you went running without a bra and why cows don't need one on their udder to keep from tripping on their really big nipples

The Bits And Pieces

We went to IKEA again. Spent about one million dollars.

We threw out the mattresses for our double beds (guest bed and Baby's new to her bed). One we tossed before we left Ann Arbor the first time, knowing we didn't have room for these beds in Asheville anyway. The other we tossed before leaving Asheville because I thought it had become moldy in the basement and it was 15 years old anyway.

So we got a cheap memory foam one from IKEA for Baby's bed. Now we can get her settled in her own room and start unpacking that room and not having it look like a giant tornado went through.

We just got the one mattress for now. It was $225, which is pretty good for a double but if it sucks I don't want to have 2 of them. Baby's not going to be too picky. We'll give it a good couple of months before we double down and get another for the guest bed.

We still haven't ordered our carpets... but... we've just about given up on the elusive 10% off coupon we've been waiting for (of course the one piece of mail to apparently get lost in the delivery... seriously?!!!!) and just have to unpack and move in.

Our bedrooms (except Kid's.. pictures to come soon... I'm almost done) are really the worst parts of the house.

We've only just been here a month. Seems longer. I feel pretty good about what we have accomplished in such a short time. We really aren't living out of boxes, which I'm fairly certain at this point in Asheville we were. We're just living off the floor ;) I just haven't wanted to fill up dressers, etc... only to have to empty them and move everything out for carpet installation. But... enough is enough... it's grating on me now.

I'm waiting on some new carpet samples (now that we're paying full price I need to take this extra seriously!). They all seemed too light for our living room and I really don't want to have to replace it in a couple of years because it got too much foot wear or stains. Once we get those we'll make our order. 5 rooms... it's going to be something like $3500! I really wanted that coupon, damn it !!!

In other fronts, I'm almost ready to start exercising for real. I've been walking 3-5 miles a day taking Kid to school and Baby around town... but I need to get a little more hardcore now. I also need to just man up and do something about my eating. I'm not out of control by any means (although I haven't weighed myself in months)... but I'm not where I want to be and some dieting will have to be involved in getting back down to my low weight. Which I would like to do. Soon. I only have one pair of pants that fit... and I'm not buying any.

Also, I'm just a little overwhelmed by all the extra curriculars I just signed Kid up for. I don't like to do that. It's not really my style. Kid didn't do any in Asheville (partly due to poorness, though). I do really think 8 hours at school is enough. But she doesn't have any friends here yet (the nice girl from the open house?... on the 2nd day of school told Kid "I can't play with you every day!"... so yeah... she's a #%^&*), and I'm trying to get her to have some fun social opportunities.

This week she starts dance & swimming which she'll do all semester. We're waiting to hear back from the local Brownie troop, we've got library after school story times, and a 3 day intensive "Cheer Camp" taught by the high school varsity cheerleaders in October (Little Miss Hot... is as excited as you imagine her to be about that one!). On top of that we've now got spelling test to study for (ugh!!! Kid is not a fan of the memorization! And I am not a fan of the afternoon breakdowns!). So it's an adjustment. Obviously we will drop any of these activities should they be too much or not fulfilling... but... she really needs to make some more peer connections so that kids at school will actually talk to her .... she eats lunch by herself :( , and has more than once been told by kids on the playground that they won't play with her :(... , and when I come to pick her up I can see her wandering around the playground alone :(.... BUT she still likes school and wants to go and KEEPS ASKING them to play. So I give her mad props because I couldn't do it. In fact I don't do it. No one has talked to me at drop off or pick up either...

Keep in mind that doesn't count Baby's activities which start this week too.

Okay that's all. Off to Trader Joe's for tomato soup!
Posted by Mrs Furious at 10:02 AM 16 comments: